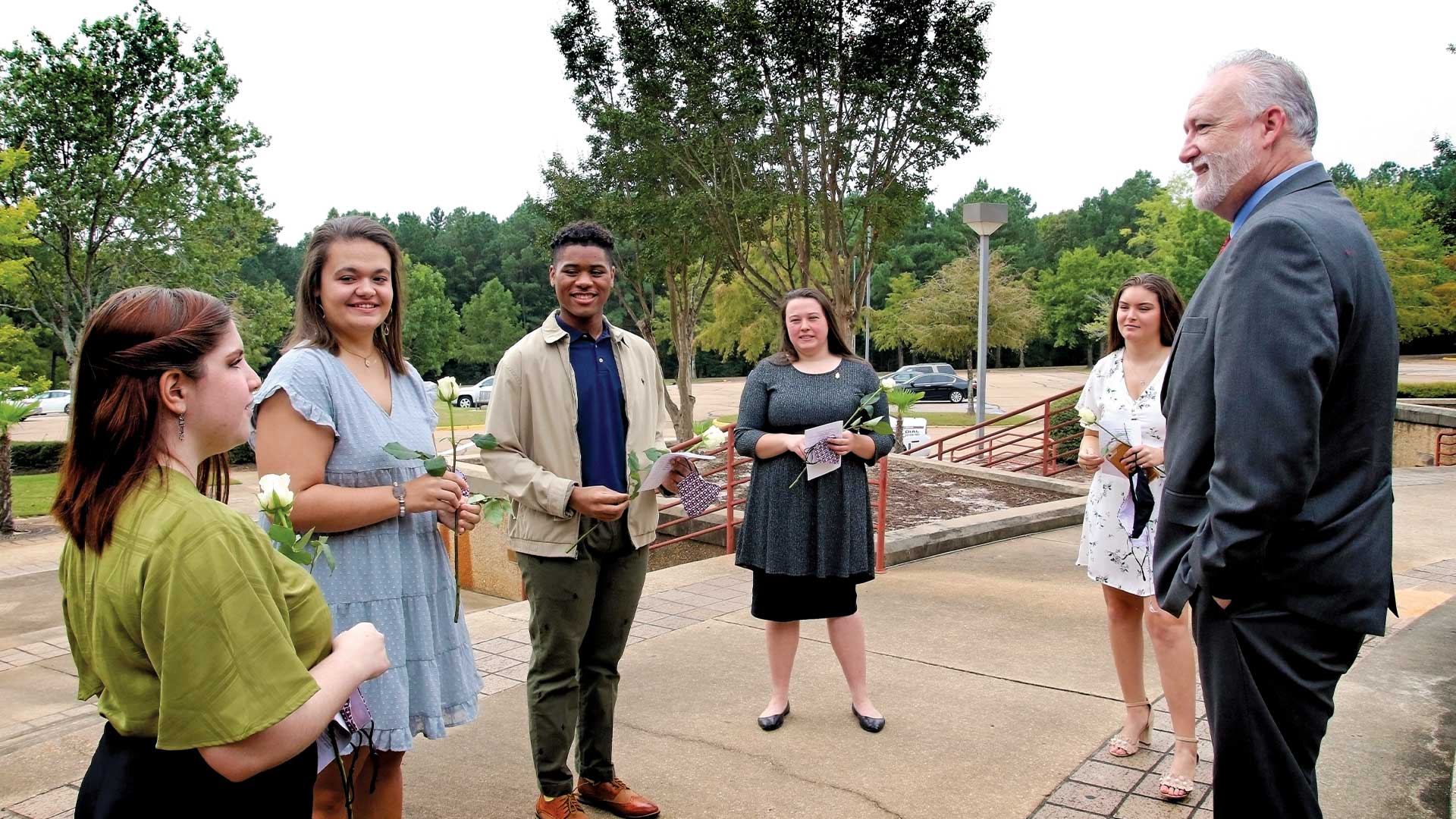 Community colleges weren’t in the original playbook for Dr. Stephen Vacik, who has been Hinds Community College president since July 1. Both parents were first-generation college students who earned doctorates. He earned a doctorate in history and initially thought he might pursue a second doctorate in foreign affairs with the hope of working for the U.S. Department of State.

His love for history led him first to a teaching position at Bevill State Community College in Jasper, Ala. Within weeks, this experience opened his eyes to the influence two-year colleges can have on a student’s life in ways that rarely happen at universities. These encounters ultimately shaped his successful journey to serve as president of the largest Mississippi community college.

One of his early experiences was mentoring a group of seven sophomore basketball players, only one of whom was on track to graduate. He enrolled them in his own history classes and met with them for an hour a day to talk about all their classes. All seven graduated on time and transferred to four-year institutions. Two earned master’s degrees.

Two other specific instances he shares as also impacting him were a young mother with low test scores who ultimately became a nurse and an older divorced woman who returned to college in order to support her family but needed extended office hours so she could get there after work. Encountering those students convinced him he was on the right path, helping others have better opportunities.

“This is what I’m supposed to do: I’m supposed to work with people who need someone to care about them,” he said. “At community colleges, you are integral to their success. You’re helping to make better lives, and better communities, and so I really found my calling.”

Dr. Vacik grew up mostly in Mobile and received three degrees from the University of Alabama – he’s still an unabashed supporter of Bama football – before that first community college job at Bevill State. Since then, he has worked at several community colleges, including seven years at East Mississippi Community College in Scooba.

He was president at two other community colleges, in Kansas and Kentucky, before being tapped for the presidency at Hinds, which he knew well by reputation.

“I knew that it was a great place to be, and I was excited about the opportunity, but I didn’t know just how special it really is here,” he said. “People genuinely care for one another. They genuinely care for our students and our purpose for existence.”

His first few weeks have had the obvious, but unanticipated challenge, of COVID-19, which has impacted the budget in a myriad of ways. Although federal CARES Act dollars have helped the college with some expenses, most were allocated directly to aid students with their costs, which is where they are most needed.

The financial challenges Hinds faces makes its relationship with alumni and donors even more important than it already was, Dr. Vacik said.

“We are very dependent upon the support of our Foundation to help us with our scholarships. Even some of our programs rely on support of the Foundation,” he said. “With market uncertainty and with people being more cautious with their resources, which I understand, it has definitely put a strain on what we do this year and even probably for the next couple years.”

College fundraising becomes even more critical than it has been, he said. “I’ve always been very engaged with the fundraising activities at other institutions and I’ll do that here as well. It will be very important for us to tap into those private monies because, frankly, public monies are going to continue to be very hard to receive. We’re going to have to be self-sufficient in many respects, and that means we’re going to need to solicit private dollars and carefully evaluate how we use our resources to fulfill our mission.”

Just as COVID-19 has impacted the college financially, it has hampered Dr. Vacik’s ability to connect with the community.

“In a normal year, I would have already met with every one of our legislators, our boards of supervisors and I would have been talking with our alumni and been out in the communities. I’ve done some of that but not nearly as I expected or would have liked to have done,” he said.

Larry Swales, president of the Alumni Association, was able to meet with Dr. Vacik. “I am pleased that he will be leading our college into the future,” he said. “While he will be facing some unprecedented challenges, he definitely has the vision, energy and passion to lead us forward. I encourage everyone to get behind him and support him as he works to make Hinds an even better place, which in turn makes our communities stronger.”

Dr. Vacik has had time time, however, to study the Hinds dynamics and begin establishing some priorities for the college.

“We have a huge area that we’re trying to serve — a lot of communities, a lot of different industries, a lot of burgeoning industries,” he said. “Looking down the road, I think we are positioned well. The key will be making sure that we all stay on point, that we don’t have so many initiatives and we’re going in so many different directions that were not able to support one another.”

Dr. Vacik said he recognizes he is leading a college that already has a strong foundation and stellar reputation. He wants to build on that legacy and continue to position Hinds as a leader. He plans on moving initiatives forward through a three prong approach for the college – Be Better, Be Different and Be Purposeful. This mantra served as the basis for his State of the College Address and will continue to be the driving theme for establishing priorities, setting budget, evaluating programs and conducting daily operations.

“I want us to carry the banner for two-year colleges in the state. To do that, we have to continue to move forward,” he said. “I want to be the organization that when a company relocates to our area and somebody asks them why, I want the first thing out of their lips to be ‘Because Hinds Community College reached out to us and kept its promises.’

“I think we are an institution that people want to emulate. We have turned out tremendous graduates over the years. We can be very proud of our alumni. They have made us who we are, and I’m committed to carrying on that tradition so that people know that Hinds alumni are going to be up to the standard they would expect. I hope people will continue to feel that sense of pride of being a graduate of Hinds Community College.”