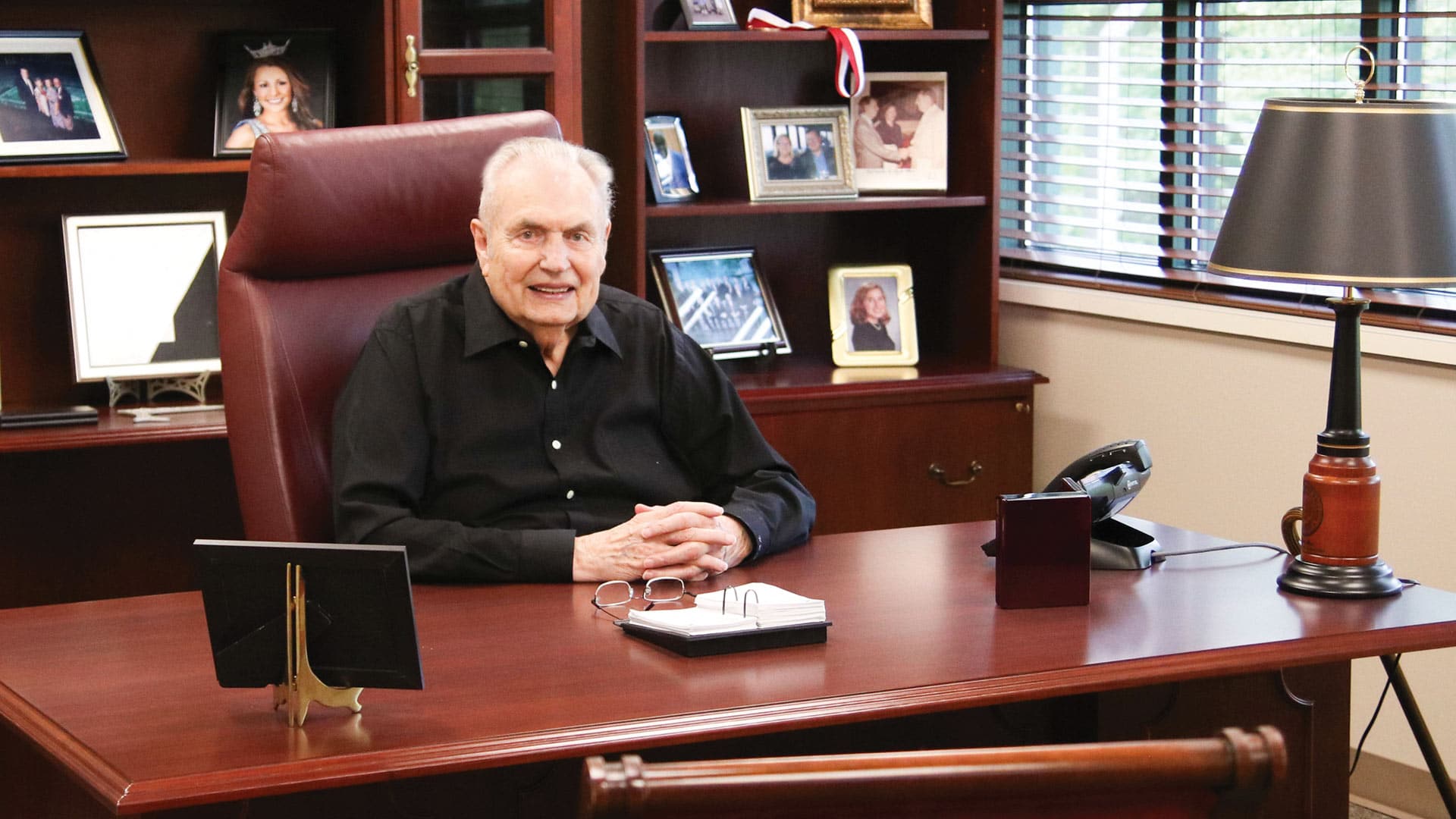 He became president of Hinds on July 1, 1978, and led the college through both good and turbulent periods. The college flourished with an expansion of programs, facilities and campuses, but also dealt with dwindling state resources.

His unprecedented accomplishments and love for students have resulted in his being the recipient of the inaugural Foundation/Alumni Hall of Fame Award, which recognizes someone who has demonstrated genuine interest and support of the college over an extended period of time.

This is the highest honor presented by the Foundation and Alumni Association. However, this isn’t the first alumni-related award presented to the Muse family. The late Vashti Muse in 2008 was the recipient of the Alumni Service Award. The Hall of Fame award is a tribute to both Muses’ lifetime of service.

Dr. Muse learned of his honor at the Board of Trustees meeting in June 2020 in a surprise announcement made by Irl Dean Rhodes (1956), chairman of the Hinds Community College Foundation, and Larry Swales (1969), president of the Alumni Association.

“To be given the opportunity over nearly 68 years of my life, to be in a position that I could be of service to others, was a great blessing to me,” Dr. Muse said. “I see this award as a testament for me in that my life has always been about service.”

He began his college career at what is now East Central Community College with no money but a desire for an education and a job to pay his way. The opportunity spurred him to accept the Hinds presidency as a way he could ensure others had the same opportunity. At the time, his family was settled happily in Meridian where he was superintendent of Meridian public schools.

“The thing I kept thinking in the back of my mind was, ‘If you go to Hinds, you are going to have the opportunity over many occasions to help individuals go to school who don’t have that opportunity because of the circumstances they find themselves in. They don’t have the money, but they’ve got a desire to go,’” Dr. Muse said.

Dr. Muse’s accomplishments over the years are legion. He led the state’s largest community college with six locations spread through five counties, making Hinds a recognized name-brand throughout the country.

Beginning early in his tenure, he fostered an ambitious building program that led to establishing two new campuses and additional facilities at all campuses.

He has been a cheerleader for workforce training, not just at Hinds but all 15 state community colleges through his tireless efforts at the state Capitol working with five governors, not to mention other state leaders.

He is best known, however, for his soft spot for students, always putting them at the center of decisions. “I came here to help serve people and the students that come to Hinds by putting them first,” he said.

His dedication to providing opportunity to students inspired the creation of the Hinds Community College Foundation as a vehicle to accept donations.

“It is fitting that Dr. Muse be the first recipient of this new award, mainly because of his 42 years of service to the Hinds Foundation and alumni but especially since he is responsible for starting the Hinds Community College Foundation,” said Jackie Granberry, Foundation executive director.

Years later, the Foundation was the means to raise money to replace Cain Hall, lost to a fire in 1998. The new Cain-Cochran Hall stands as a symbol of the Foundation’s importance to the college and Dr. Muse’s foresight.

The Foundation sponsored the Celebrating the Muse Legacy Luncheon on Feb. 20, a fundraiser for the Muse Legacy Endowment that will support projects dear to Dr. Muse’s heart: scholarships, faculty and staff development, and community service.

The COVID-19 pandemic forced the cancellation of subsequent events and the endowment fell short of its $250,000 goal.

“Thanks to all the many people who have contributed through the Foundation to help other people,” Dr. Muse said. “One of the things I’m most pleased with – selfish, I guess – is the Muse Legacy Endowment. I would like to see it hit that $250,000 mark.”

“It remains a top priority of the Foundation to reach that goal in order to honor a servant who has dedicated his life to Hinds Community College,” she said.

Contributions are still being accepted through the Hinds Community College Foundation by calling the Foundation office at 601-857-3363 or online.