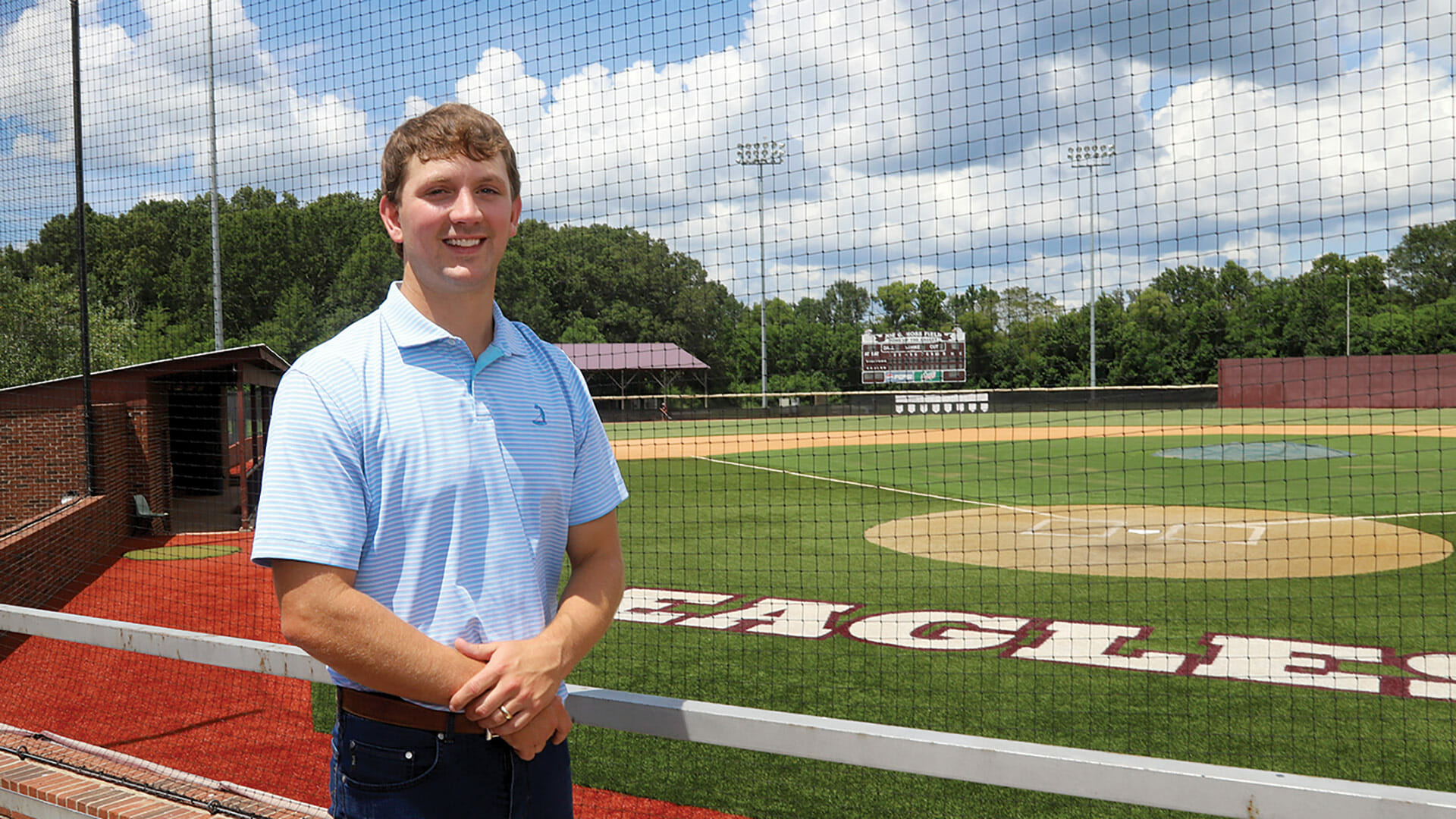 Pierson Waring (2012) started playing baseball when he was six years old and came to Hinds in 2010 to play Eagles baseball under coaches Sam Temple and Dan Rives. Baseball has continued to play a big role in the life of the Vicksburg native, who is the 2022 Young Alumnus of the Year.

“I grew up a lot when I came to Hinds. I got away from the family a little bit. Not too far. But I had to learn to live on my own and be more independent,” he said. In 2012, Waring played second base on the team that beat Itawamba Community College to win the state championship.

“I enjoyed the chemistry with the guys and having fun – it’s a kid’s sport. It’s all about having fun,” he said.

Temple, who is now Clinton High School baseball coach and assistant athletic director, “would get on you pretty quick,” he said. Rives, who returned to Hinds in 2021 to replace Temple as head baseball coach, “was a little more laid back.” From the both of them, Waring learned that “hard work pays off.” Rives recalls that Waring played a pivotal role in winning the state championship, as well as being an All-State performer his freshman year in 2011. Rives has continued to keep tabs on him through the years.

“Pierson is an outstanding young man, well respected throughout his community and hometown, as well as someone who has a great affinity for this college,” Rives said.

Waring spent a semester at Mississippi State University, transferred to Union University in Jackson, Tenn., where he finished his baseball career, and then returned back to MSU where he graduated. “Hinds definitely gives you a better chance to move up to a four-year school, absolutely,” he said.

Waring now works for his family business, Waring Oil and Neill Gas, but returns often to Hinds, supporting the college by playing in the Golf Fun Fest and Clyde Donnell/Othel Mendrop Memorial Golf Tournament that raise money for student scholarships and participating in alumni events, especially those aimed at baseball. His family business also gives the Waring Oil LLC Athletic Scholarship every year.

“I’m usually with a few guys that I played ball with there,” Waring said. “We all jump in the truck and ride over and see some old friends. “I do enjoy golf and playing with a bunch of Hinds people that I hadn’t seen in a while. It’s always good to reconnect with everybody I haven’t seen in years and reminisce on all the practices and hard work we put in together,” he said.

Last year he partnered with former Cubs player Roosevelt Brown and Vicksburg businesswoman Anna Tillotson to open The Sandlot of Vicksburg. “We have six batting cages, an open area for ground balls, running sprints and exercising. It’s mainly for kids and they can start training from t-ball age up to high school, but we also do lessons for college and minor league guys,” he said.