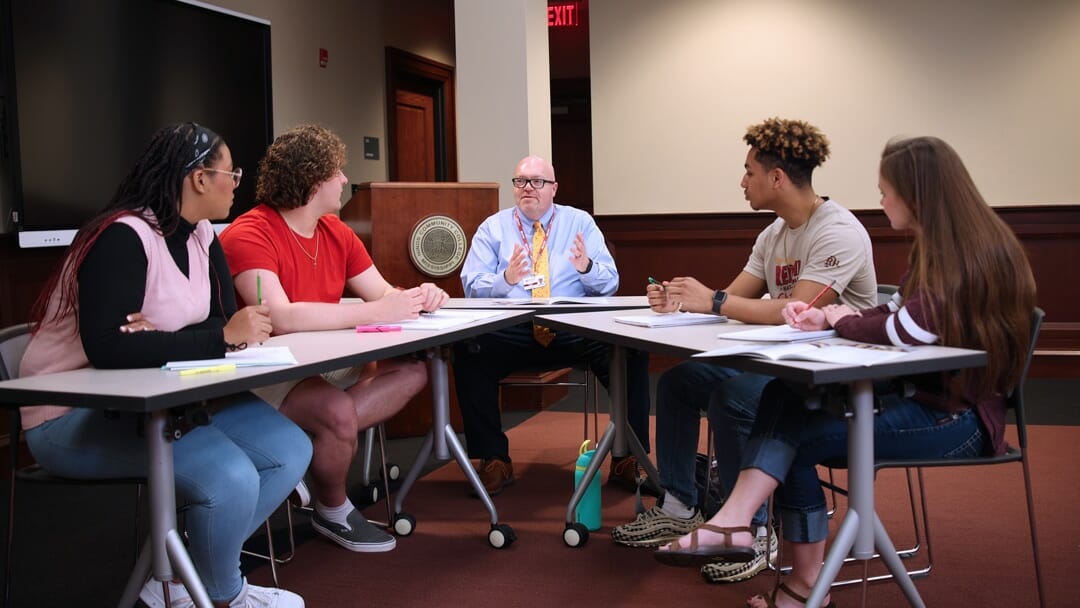 Matt Jones is new to Hinds but he feels like he already knows the students. Jones, who became Executive Director of the Hinds Community College Foundation in January, feels he knows Hinds students because some years ago he was much like them.

“I was a young man in high school who did not apply himself but did really well on all the national tests. I had the intelligence, but I didn’t really have a direction,” he said.

“Now what motivates me are those kids I can resonate with, the ones who need a little help, that need book money, that need some help to live in the dorms or a meal plan or whatever it is they need to achieve their goals,” Jones said.

Like many community college students, he didn’t leave high school thinking he needed a college degree.

He lived in Tuscaloosa and was already successfully immersed in radio broadcasting, eventually working his way up to calling games for University of Alabama baseball and women’s basketball on the Alabama Radio Network. But at age 24, he realized his career at a major university wasn’t going to advance without a college degree.

“I had some friends who went to East Mississippi and they told me I should come and visit. It was a little slower paced than Shelton State and a much smaller campus,” he said.

He won a scholarship for choir and band, which “helped me to make ends meet and allowed me to come to Mississippi. And that’s where my journey got its catapult,” he said.

At East Mississippi, he found a home, friends, colleagues, mentors and a nurturing environment that allowed him to win another set of scholarships to attend Delta State University in Cleveland, where he also wound up working for nearly 19 years after earning bachelor’s and master’s degrees.

In his career he has had a variety of positions that included working directly with students and fund-raising to help them, in Mississippi and Alabama. His most recent position was as Senior Associate Director of Athletics at Samford University in Birmingham, the same position he held at Delta State for nine years before that.

“I’ve been able to work with diverse students, students who had similar stories as myself, who had opportunities as youngsters but didn’t take them. There is a whole batch of people out there who have the ability, have the means, have the opportunity but just never stepped through the door,” Jones said.

As executive director of the Foundation, Jones replaces Jackie Granberry, who retired in January after 42 years working at Hinds.

“I’m excited to have Matt as the Foundation Director. His past experiences in fundraising and his understanding and appreciation of community colleges make him a great choice,” Granberry said. “I’ve enjoyed getting to know him, and I know he will do outstanding work moving the Foundation forward.” Hinds President Dr. Stephen Vacik said while following Granberry is not easy, Jones is the right person for the job.

“I am so pleased to have Matt Jones join our leadership team,” he said. “Of course, following a legend like Jackie Granberry is not an easy task, but I have full confidence in him. His college background and his ties to Mississippi, along with his vast experience, position him perfectly to lead our fund development efforts and will contribute to our moving the college forward.” Jones has spent his time so far as much out of his Fountain Hall office than in it, getting into the community and getting to know everyone from major Foundation donors to community leaders who can help Hinds accomplish its mission.

“The thing that has excited me in my meetings with Matt is his vision to take the Foundation into this new season,” said Foundation board chairman Jimmy Morton (1982). “Matt sees the value of our great history and building on that history. He brings a fresh set of eyes and ideas going forward. We are blessed to have him, and I look forward to working with him to that end.”

Jones’ priority for the Foundation will remain on student scholarships, which has been its primary mission from the beginning.

“We are the front door to greater educational opportunities in someone’s life.”