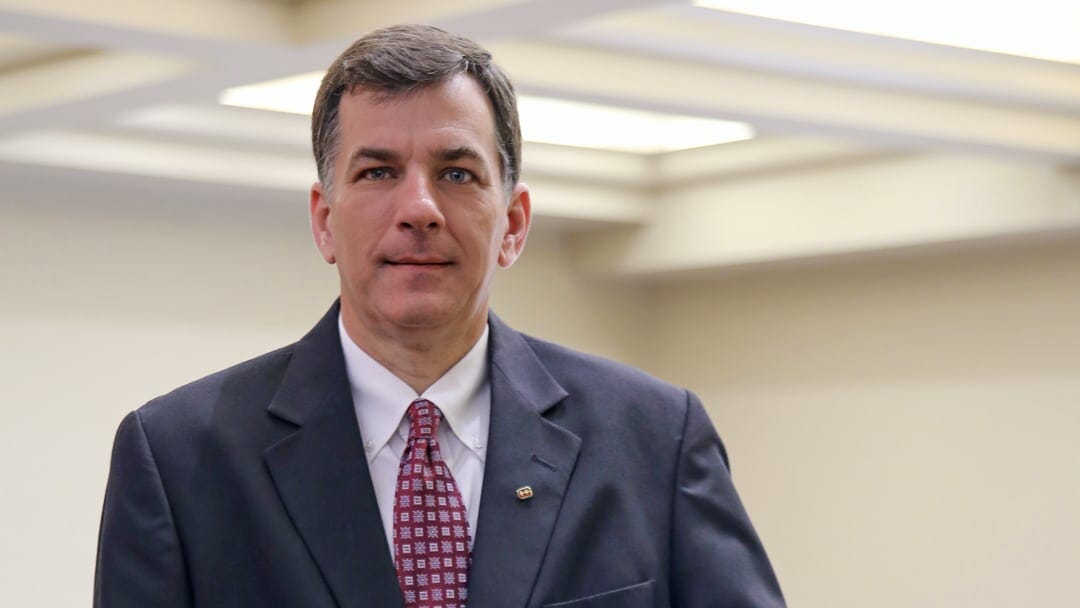 Hinds was the first step into a bigger world for Randall Harris (1989) when he graduated with 17 other seniors from Central Hinds Academy in 1987 and took college-level English composition classes that summer.

That first step turned into a journey with Hinds when Harris returned in 2011 as District Director of Admissions and Records/District Registrar and eventually became Vice President of Operations and Student Services. He retires from his Hinds position on March 31 to concentrate on existing personal business interests and his role as City of Raymond alderman.

The timing, he said, was perfect for his family. He and his wife have two children, Lindsey and Owen. Lindsey is finishing her second year at Mississippi College and Owen will be a Hinds student this fall.

“We have been talking about my early retirement for years,” he said.

A Raymond native, Harris’ Hinds roots run deep. His parents attended Hinds and so did his older sister Daniece (1987), who was in Hinds Connection, a student group focusing on recruiting and serving the college.

His early years were spent growing up in a house bordering the campus.

“As a child playing outside, I could see the college campus and knew that one day I would be old enough to go to school there as well,” he said.

It seemed natural that he would not only begin his college journey at Hinds but also become a member of Hinds Connection, which he believes helped put him on the road to success in his 31-year career in management. Because he graduated from such a small high school, he grew up interacting with the same small group of people. Hinds gave him exposure to a larger world.

He said his Hinds Connection experience forced him to learn new life skills, such as speaking to groups and leading campus tours, as well as being on time and following through with commitments.

“Just like with some of our students today, seeing them change in the two years that we have them, that was what it was like for me. I was somebody who didn’t like to get in front of people. Connection forced me to do some of that,” he said.

After earning a bachelor’s degree in business from the University of Southern Mississippi, he worked in management positions for Walmart stores for 8 ½ years. He earned an MBA at Mississippi College then spent almost 14 years with BellSouth/AT&T before landing a position at Hinds.

Rapid change has been a hallmark of his Hinds experience. “I’ve enjoyed it because that’s what I was used to,” he said. “That was one of the things that made it a good fit. I was used to a high pace, change. I tried to bring some of that here.”

He plans to continue his relationship with Hinds as a volunteer as well as volunteer with his church. “I want to look for volunteer opportunities and help everywhere I can,” he said.

Replacing Harris as Vice President of Student Services is Dr. Jenny Miles. Harris, who came to Hinds with an MBA and an extensive business background, said he believes the college needs someone with Miles’ resume.

“She is a Student Services professional and is well prepared to take Hinds to the next level,” he said.

A retirement reception for Randall Harris will be 2:30 p.m. to 4 p.m. March 31 in the Centennial Room at Fountain Hall with a short program at 3:30 p.m.