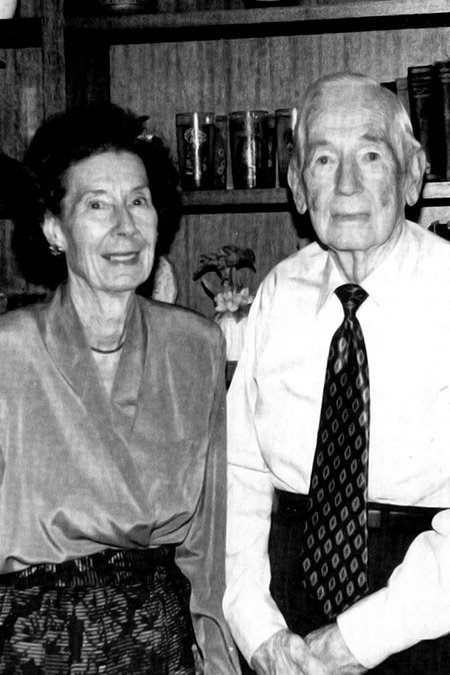 Devoted to each other and to Hinds, we are reminded of Virginia and Marvin Riggs each time the carillons chime from the bell tower clock near the Raymond Campus Courtyard. Marvin Riggs gifted the clock and carillons to the college in honor of his beloved wife in 1995.

Virginia Mayfield Riggs began her tenure at Hinds in 1956 as an assistant librarian and became head librarian in 1960 before being named the first director of the Hinds Junior College Learning Resources Center, a position she held until her retirement in 1975. She designed the G.M. McLendon Library on the Raymond Campus, helped to establish the library at the Jackson Campus-Academic/Technical Center and initiated plans for the library at the Vicksburg-Warren Campus prior to her retirement. The library staff chose to honor her with the Riggs Reading Room on the Raymond Campus. She also served on the Foundation board.

Marvin Riggs was principal at Utica High School from 1938 to 1942, when he enlisted in the Army during World War II. After the war, he was an administrator and teacher at Sunflower Junior College (now Mississippi Delta Community College) until 1954. He taught history and social studies at Hinds from 1955 to 1976. He established the Virginia Mayfield Riggs Endowed Scholarship as a loving tribute on the couple’s 50th wedding anniversary. It was one of the first endowed scholarships for the Foundation. She later established the Marvin Riggs Endowed Scholarship in his honor.

While they appeared unapproachable in many ways, the Riggs had a heart for students – especially students who were willing to work for their future. Before the Foundation came into existence, the Riggs would call trusted Hinds colleagues and ask about students with financial needs. They established the Marvin and Virginia Riggs Work Scholarship through the Foundation. It was important to them that a student did not perceive the scholarship as an entitlement. Instead, students were expected to labor in some way to earn the scholarship, often in a student worker position at the college.

Known as avid and very successful stock market investors, the couple shared their knowledge with anyone who was interested. While they were very frugal, and spent very little on themselves, they were quite generous with their church and several colleges. Hinds was definitely a major benefactor of their generosity. The Riggs were also a major benefactor for Riggs Manor Retirement Home, which is a part of Mississippi Methodist Senior Services. Located in Raymond, it is the home to many former Hinds employees and students.