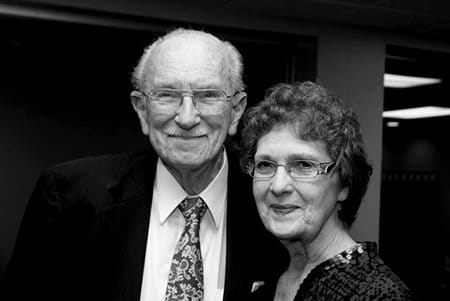 Sue Longest Brooks and Fred L. Brooks taught in the Speech Department for a combined total of 54 years. The Brooks were responsible for building a dynamic department offering a variety of majors in theater, speech and mass communication.

Fred Brooks came to Hinds as the only speech instructor teaching in a small room in the old Auditorium building; at his retirement, multiple full- and part-time instructors taught in a new classroom and theatre building. Helping with the design of the building, upon its completion, he was honored when the building was dedicated as the Fred L. Brooks Speech and Drama Building; the attached theatre was named Brooks Theatre.

For many years, Fred would carefully select a tie to gift to Hinds President Dr. Clyde Muse for his Dec. 25 birthday. After retiring, Fred would be among the retirees to attend Convocation each January. From the stage, Dr. Muse, wearing the gift, would publicly thank Fred for the tie, typically a snazzy design with a touch of purple, Vashti Muse’s favorite color.

Sue Brooks brought with her to Hinds recognition as Mississippi’s Outstanding Speech Instructor, from the Mississippi Speech Association. She created and taught an intensive public speaking camp for state officers of the Future Farmers of America and a similar evening course for elected officials and other professionals.

She was a faculty leader eagerly sought to serve on college-wide committees. Her affable manner, exceptional communication skills and utmost dedication to student success made her a valuable participant. She played a major role in a 1980s college-wide customer service effort, “I am Here for Students,” which involved employees at all levels and is still remembered today.

Sue Brooks contributed to a scholarship created in their names in order to endow it. The colleague who established the scholarship said of the Brooks: “I consider the Brooks to be the epitome of professional educators. They encouraged those in their classes to work hard, be fair and to become better students and people. The Brooks have always been active supporters of Hinds Community College, the community and their professional organizations. To those who know them, they are loyal and loving friends.”

Both Fred and Sue Brooks received the Outstanding and Distinguished Academic Instructor of the Year awards and both were named as Professor Emeritus of Speech and Theatre.