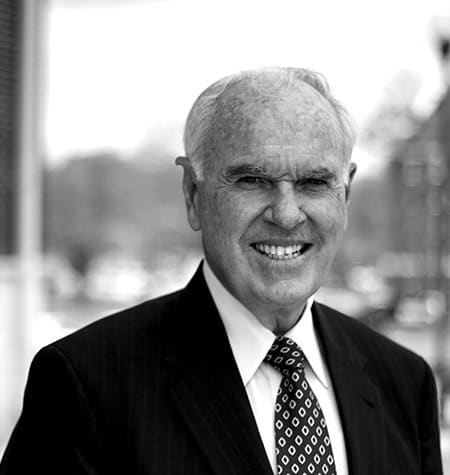 James W. “Jim” Smith has come a long way from working in the cafeteria at Hinds to pay for school to serving in the highest position within the Mississippi court system – chief justice of the Mississippi Supreme Court. All the while, he credits his success to the foundation that he received at Hinds Junior College. He pinpoints psychology instructor Dr. Michael Rabalais, who helped him to develop what Smith calls “my ability to read people,” adding, “He taught me how to interrogate and that is an important part of being a good lawyer.”

Smith graduated from Hinds in 1963. After a stint in the military, he started his career as a Pearl High School teacher. He completed his law degree in 1972 and master’s degree in school administration in 1973. He then practiced law and served in a number of positions including City of Pearl prosecuting attorney, Rankin County prosecuting attorney, Rankin County School District attorney and district attorney for the 20th Circuit Court District for Rankin and Madison counties. He served in that capacity until Gov. William Winter tapped him for Rankin County Court Judge in 1982. He was elected to the Mississippi Supreme Court in 1992 and served 16 years, including four as chief justice. Smith has been honored many times throughout his legal career, particularly for his work to protect children and youth.

His ties to Hinds have remained strong throughout a busy and demanding career. His wife, Kathy, is an English instructor at the Rankin Campus. Earlier in his career, he was an adjunct instructor for business law. Smith was named 1996 Alumnus of the Year and served on the Foundation Board of Directors, including a term as chair.

When speaking at the May 2015 Hinds commencement, Smith said, “An excellent education is a key factor in your success in life. The quality of that education is the forefront and the cornerstone of it all. Hinds is accomplishing this task with ease. It always has, it always will.”