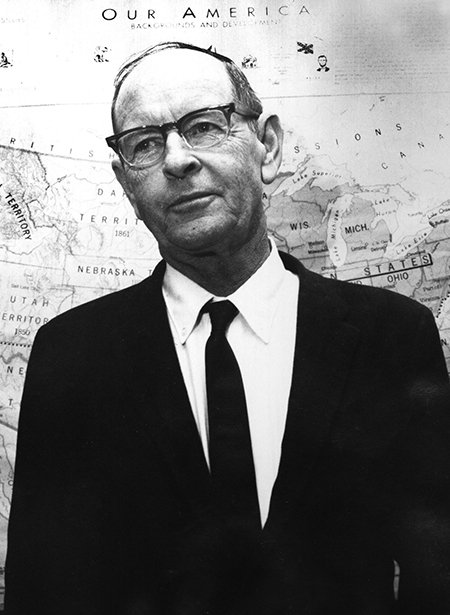 J.B. Patrick was a revered American history teacher at Hinds Junior College from 1948 to 1971. A Learned, Miss., resident, he made a daily round trip to Raymond to teach classes attended by his students with anticipation. Recognized as a quiet, unassuming intellectual, Patrick “came alive” when he began lecturing.

During World War II, Patrick was a member of military intelligence, a role that supplied many stories to tell when he lectured on World War II. Former students tell of Patrick’s professional dress and manner in the classroom. At each class meeting, Patrick entered the room, removed from his pocket a small notebook, opened it, read briefly, returned the notebook to his pocket and began talking about that day’s topic. He never looked at a book or at notes as he held the students’ attention through a conversational lecture filled with facts and stories. At the end of the class meeting, Patrick again removed the notebook, wrote a brief notation and returned the notebook to his pocket.

With a passion for history and for Hinds, with an amazing knowledge of his subject and with an uncanny ability to hold a listener’s attention, Patrick led hundreds of students to appreciate American history. The words of the 1967 Eagle yearbook dedication to J.B. Patrick show the respect and admiration he enjoyed from his students and colleagues.

Harris-Patrick Hall on the Raymond Campus is named in his honor.