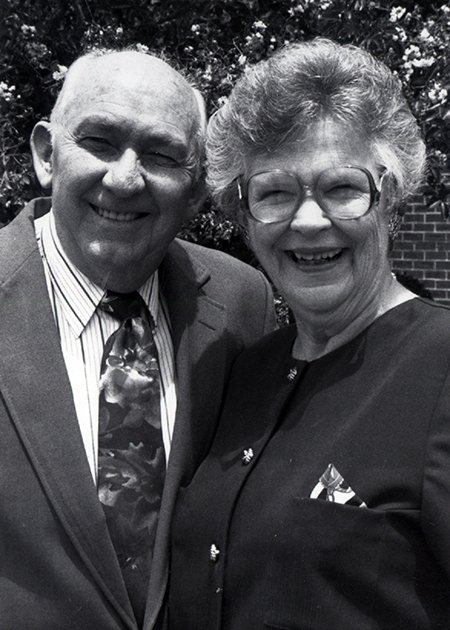 No one who knows the Reeves was surprised when the music department building on the Raymond Campus was named Reeves Hall. Affectionately known as Mama and Papa for their care and concern for their students, Geneva D. Reeves and James Leslie Reeves, with grace and smiles, gave Hinds music for 30 years.

Choir programs were always professional and beautiful. Hinds and the local community looked forward to the annual choir programs, especially the Christmas programs, directed by the Reeves. Attendees knew to come early if they wanted a seat for a program in Cain Hall. One Christmas when Cain Hall was under renovation, the choir program was in Denton Gym. Decorations included a giant parachute artistically draped in the ceiling and many twinkling lights, a spectacular sight.

The Reeves’ influence on students and the college are reflected in statements from students. A former student said of Geneva Reeves, “After only seconds in her presence, you knew you were loved and cherished as part of her life and choir family.” A program from a choir reunion included these comments: “What they left behind was more than just 30 years of service. It has become a legacy, a contribution of experiences turned into memories that have become invaluable to the choir members they touched along the way.”

The number of former students attending choir reunions was always huge during the Reeves’ years. When they were honored during Homecoming 1982 for 25 years of service, more than 250 members of 25 Hinds’ choirs returned for a reunion. The reunion choir was so massive that the assembled guests packed the stage in old Cain Hall, while the choir filled the audience seats to sing old favorites.

“Students felt loved and accepted for whoever they were and the Reeves miraculously created beautiful music with whatever talent (or lack thereof) they were given,” said Judy Bufkin, a former choir member who is currently special events coordinator for the college.

Through the years, the Reeves gave students wonderful experiences – singing with the Mississippi Symphony and the Mississippi Opera – and took them to the world stage in places like Florence, Italy, and Mexico City. From Sunday morning performances in local churches to trips to New York City, the Reeves made choir a family.

Those who loved the Reeves and the music and those students who populated choirs year after year will always hear in their minds “Still, Still, Still,” the signature closing selection for all choir programs. The Geneva and James Leslie Reeves Scholarship was established by family and friends.