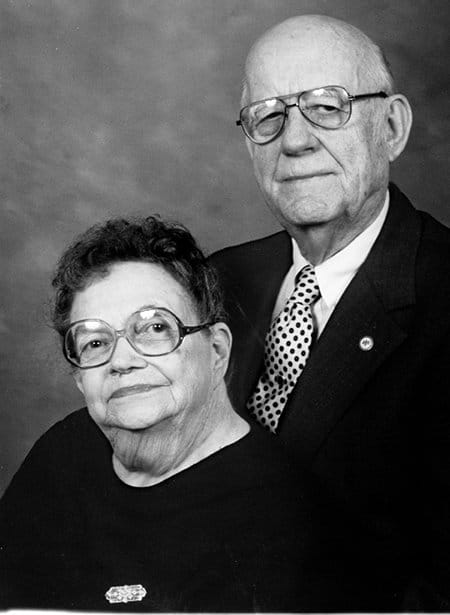 It was seldom that people spoke or thought about W.H. Cochran without a mention of his wife, Emma Grace. They met under an oak tree on the Raymond Campus in 1930, married in 1933 and made Hinds County home when W.H. became principal of Byram High School in 1946. Emma Grace was hired to teach math. Beloved educators, they were devoted to each other and to improving education in rural Hinds County.

W.H. joined the Hinds Board of Trustees when he became superintendent of Hinds County Schools in 1971, serving until 1976. Emma Grace had earned a reputation as an authority on teaching techniques for modern math and was selected to be the math supervisor for the school system.

Emma Grace had an impish sense of humor. Dale Sullivan, a Hinds trustee, recalls being in a math workshop led by Emma Grace. The teachers were bemoaning the lack of support they received from their superiors and asked for her advice. She replied, “Well you can just do what I do, sleep with the superintendent.” Her answer was met with an outburst of laughter, as well as some shocked looks from teachers who did not know her spouse was the superintendent.

The couple earned their bachelor’s degrees from Mississippi College. W.H. received his master’s degree from the University of Mississippi in 1946, with Emma Grace completing her master’s the next year. When they retired in the mid-1970s, the Cochrans became active in the Retired Teachers Association and served in state and national leadership positions to promote and protect retirement benefits for professional educators.

In 1983, the Cochrans were the first couple to jointly earn the Hinds Junior College Alumnus of the Year Award. They remained involved with the college throughout their careers, as well as in retirement. Members of numerous professional and civic organizations, the Cochrans enthusiastically promoted the college and the opportunities it provided for an affordable, quality higher education.

The college posthumously honored the Cochrans in 2002 when dedicating the building that replaced Cain Hall, the 1926 structure originally named for Hinds Junior College President George Judson Cain. The building burned to the ground when it was struck by lightning in March 1998. Fittingly, Cain was president when the Cochrans were students at Hinds.

Their sons, U.S. Sen. Thad Cochran and former Central District Mississippi Public Service Commissioner Nielsen Cochran, spoke at the dedication of Cain-Cochran Hall. “I am deeply grateful for the honor you’ve bestowed on the memory of our parents,” Thad Cochran said. “It is heartwarming knowing how much this would mean to my parents because I know how much their college experience meant to them.”

A Hinds Foundation scholarship was established in their names in 1984 and later endowed.