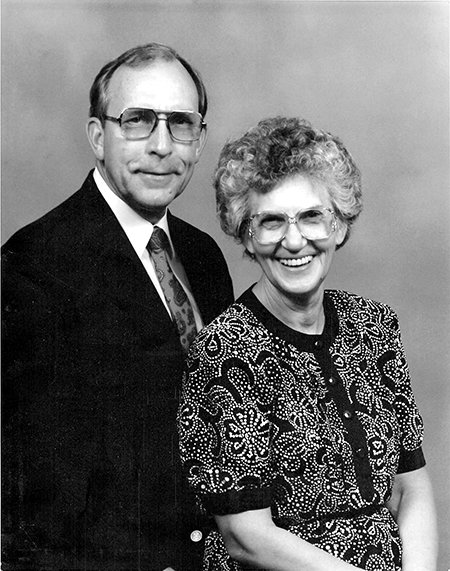 From preparing meals for every occasion hosted by the college, to developing the first evening school offerings, Alice and Charles Walker together dedicated more than 50 years to serving Hinds. Having lived on campus for most of those years, their five children also were actively involved in the college even before they became students. The children tell many stories of growing up on campus: from sliding down the infamous fire escape in the old Cain Hall, to sneaking into the Old Men’s Gym on weekends to play basketball and also being conscripted annually into service to assist their father in assembling and disassembling for student registration.

Charles Walker started his career at Hinds in 1967 as a drafting instructor. He moved into administration in 1973 when he was named director of the Evening School. Under his leadership, Hinds had a robust evening curriculum of credit and noncredit courses. Building upon that success, he became director of Continuing Education and Community Services, with the goal of expanding non-credit courses. In 1987, he was called to the Utica Campus to coordinate the physical plant. He had a knack for producing beautifully landscaped grounds, and the Utica Campus grounds blossomed under his care. In 1993, coordination of transportation for the college district was added to his responsibilities. He served in that role until his untimely death in 1994.

Alice Walker was hired as the Dietitian Technician instructor in 1972. Her title changed to Home Economics instructor in 1976. When Dr. Clyde Muse came to Hinds in 1978, he immediately learned that Alice (or “Laverne,” as he called her) could cook and host an amazing party, so Special Events coordinator was added to her duties. She and Vashti Muse spent hours planning the menus. Mrs. Walker would prepare the food, and she and Mr. Walker would deliver and create a special setting for guests at the event. Over the years, Mrs. Walker’s culinary talents produced some signature dishes – sausage balls and corn soup – that were college favorites.

Mrs. Walker’s gracious nature and generous heart made her a perfect choice to develop and sponsor a student ambassador group at Hinds, which she did at the request of the Muses. Hinds Connection was created, and the group’s first assignment was serving at Dr. Muse’s Investiture in April 1979. These students, as well as the many others who followed, learned to love Mrs. Walker and considered her as a second mother. She definitely endeared herself to them, especially since she was always preparing delicious food for their enjoyment.

Both Mr. and Mrs. Walker went about their duties with personal commitment and quiet organization. Neither preferred the limelight; serving behind the scenes fit their personalities well. The “Walker Touch” was instantly recognized at most college events for nearly 10 years.

The couple were 3E Award recipients. The Hinds Community College Education Association faculty group dedicated a cookbook to Mrs. Walker, which included some of her favorite recipes. As a part of the Centennial celebration, Hinds Connection presented a decorative bench for the Fountain Hall grounds in honor of Mrs. Walker and in memory of Mrs. Muse.