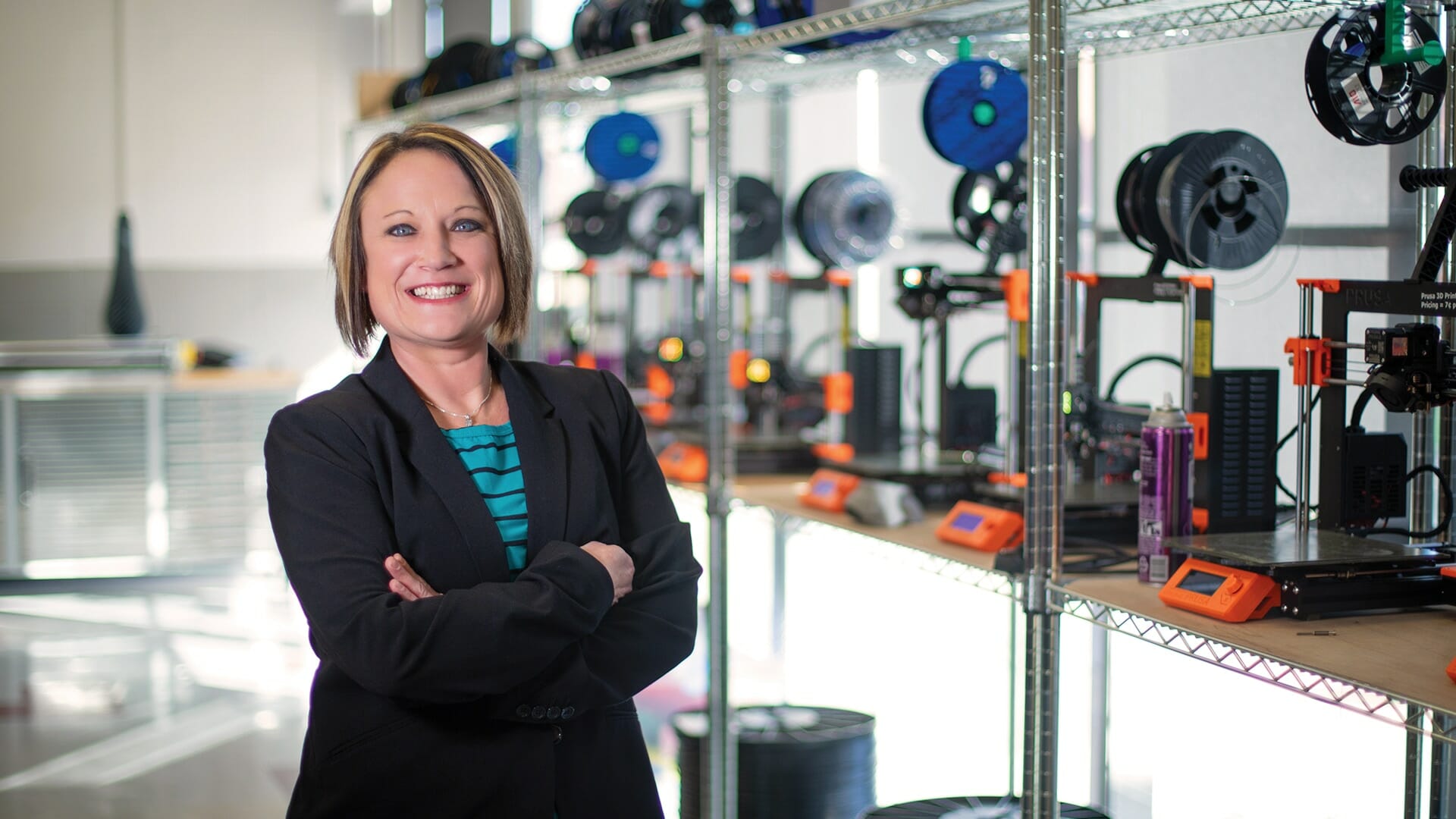 Jenny Laird (2002) began her career in scientific research two decades ago cleaning storage tanks where invasive species of plants were kept for study.  Since then, her career hasn’t as much grown as it has flown – by way of expansive aviation technology used by the U.S. Army Corps of Engineers to fulfill its civil works missions, military, emergency response and research and development missions.

“I’ll get calls from people and they say, ‘Yeah, you’re the drone girl and you know what you’re talking about,’” Laird said. “I’m very humble about it. I’d never dreamt I’d be in the position I am today. But, it all started with attending Hinds and being prepared to be the best I can be.”

Laird, 38, of Vicksburg, is a research biologist and program manager for Unmanned Aircraft Systems (UAS) at the U.S. Army Engineer Research and Development Center (ERDC) in Vicksburg. She supervises seven research labs in the United States and assists test and payload development for the UAS program, which involves the small craft popularly known as drones.

Her start in a STEM career began at Hinds, where she spent two years after first trying a four-year university out of state straight out of Vicksburg High School. “I was able to take a lot of basic courses at Hinds, which made it a lot easier on me once I transferred to another school,” she said, adding coming home to attend Hinds at the time made sense for her socially. “I’ve always been one to talk to people and really get to know them, and you can’t do that as much at a big, four-year university.”

Life as a commuter student at the Vicksburg-Warren and Raymond campuses allowed her to “learn and earn” while pursuing a career in what were her strengths. “I was able to work my first job at ERDC and attend school at the same time because of the flexible classes Hinds offers,” Laird said. “My biology courses went hand-in-hand with the work I was doing with aquatic plants.”

She took care of her core academic courses at Hinds – her favorites of which were biology and chemistry – before transferring to Mississippi College, where she earned her bachelor’s degree in biological sciences. “The instructors and pretty much everybody you meet at Hinds are always willing to help,” she said. “Whatever it takes to help you get it done, they’re willing to help you do it and situate you for a better life.”

Later, she earned a master’s degree online, in wildlife science, from Texas A&M University. In 2017, she was tapped to help establish the UAS program at ERDC as unmanned craft had become increasingly useful for Corps biologists across a wide spectrum of environmental research fields, ranging from feral hogs to farm-raised catfish.

Just as recently, Laird has returned to the Hinds classroom, in a way, in a unique capacity. Hinds has provided instruction and classroom space for Corps employees seeking to be licensed UAS pilots and operators, as per federal aviation regulations. In 2021, the training has expanded to prepare its participants to inspect and collect data from devices attached to drones for operations such as levee and bridge repair. Laird has helped coordinate the training on ERDC’s end, working closely with the college’s Career and Technical Education faculty and staff.

“Coming back here as a professional to work with Hinds on the UAS program has just been easy and comfortable,” she said. “It’s never a hesitation with anything we’ve asked Hinds to help us with, as far as the UAS program.” Laird has highlighted the partnership and advocated for Hinds far beyond Central Mississippi through webinars and conferences, said Josh Bower, director of Talent, Workforce & Economic Development, who has worked with Laird the past three years to plan and implement the drone training with the Corps.

“Jenny has graciously scheduled time to present at Hinds Honors Forums, participated on the Aviation Department’s Industry Advisory Committee and donated UAS equipment to the college,” Bower said. About 126 people with the Corps have participated in pilot certificate training and about 34 people have completed primary flight training since the ERDC partnership with the college began, Laird said.

“The partnership with Hinds to train our staff has been exceptional,” she said. “It put us into good standing for drone operations a year ahead of schedule compared to our initial estimates.”

Laird also encourages more young women to pursue careers in math and science, mainly because they could lead to career opportunities they might not have ever thought about – much like her own experience. “When I was doing biological work, there were a lot of female scientists. But when I switched over to aviation, I see it’s definitely a male-dominated area,” Laird said. “But, the training and mentors I’ve had along the way have prepared me to say, ‘Yes, I can come into this career area and help lead the way for other women.’”

“But, it’s crazy how the wheels can turn in your career, and it leads you into a completely different area.”