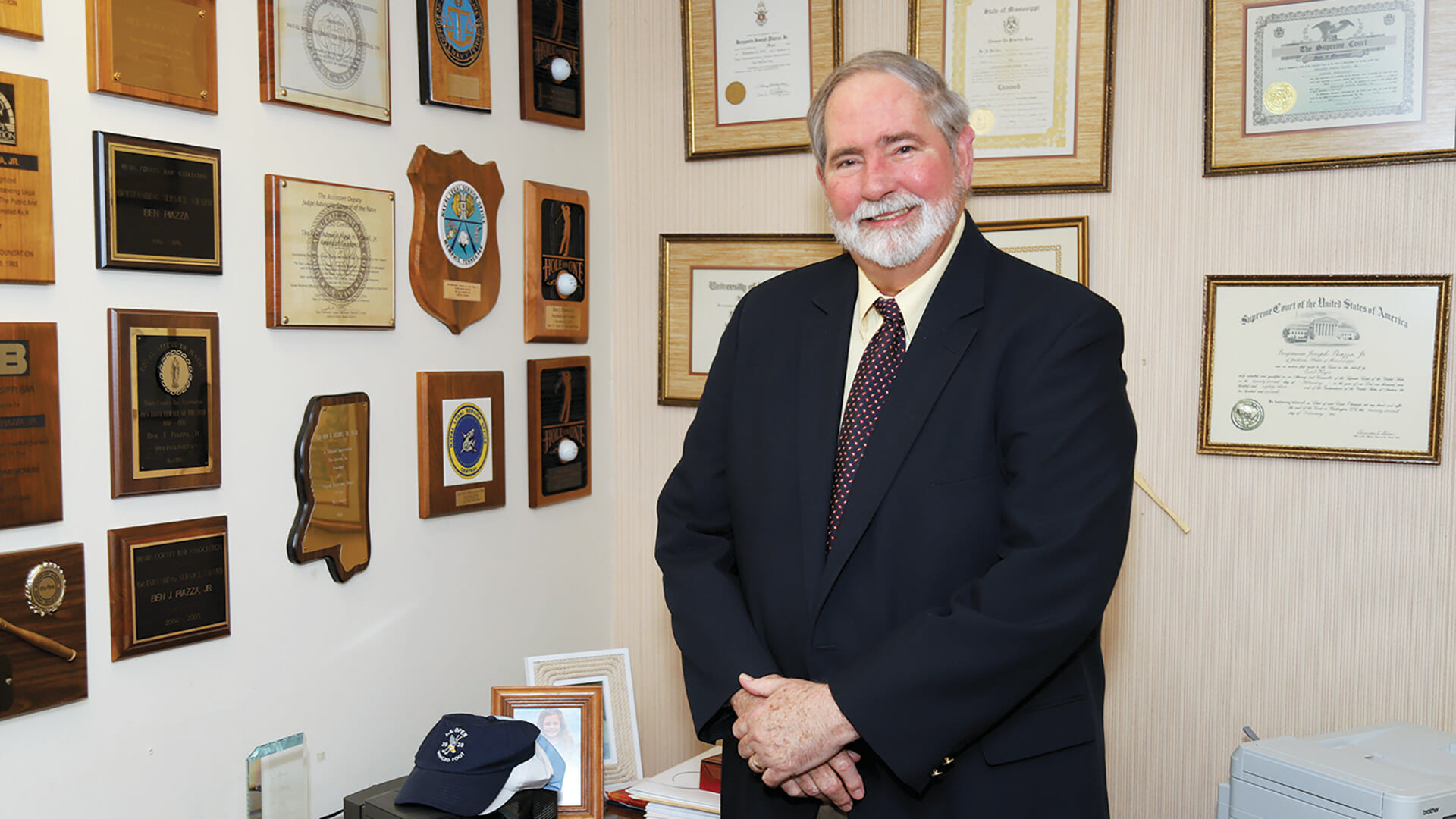 As a student, Hinds Community College was a one-semester bridge for Jackson lawyer Ben Piazza from where he was to where he wanted to go. But a decade or so later, after joining the Navy and earning a law degree from the University of Mississippi in 1976, he found himself back at Hinds, this time in a professional capacity.

Piazza is being honored as the 2022 Alumni Service Award recipient. His service to the college spans 45 years, beginning in 1977 when he served as the attorney for the college’s Board of Trustees when Robert Mayo was still the college president and continuing past President Emeritus Dr. Clyde Muse’s tenure until 2021. “It was the highlight of my professional career,” Piazza said.

His service has continued as he is now a member of the Hinds Community College Foundation Board of Directors, which he helped to create in his professional capacity in 1979.

In between, he has supported the college, in multiple ways, including playing in most of the Golf Fun Fest tournaments and endowing a scholarship in the names of himself and his wife Kathy. “There are a number of ways you can help Hinds. The most direct way is to make donations to the Foundation,” he said. The scholarship is “going to be around. I’m not going to be around 10 or 20 years from now, but that scholarship is still going to be there. I’m really pleased and happy that it will be.”

Jackie Granberry, who retired in January as Executive Director of the Foundation, can tick off a long list of the ways Piazza has supported the college.

“He has donated to every major campaign that the Foundation has ever held,” she said. “He was a lead sponsor for the Muse Legacy Luncheon. There is rarely a Hinds event that Ben is not present. He has been a treasure to Hinds and to the Foundation.”

All three of his children – Benjamin, Katie and Daniel – attended Hinds, with the oldest participating in the Honors program.

“He did wonderfully well and went on from there with full scholarships to senior college. I saw the benefit of students going to Hinds, not just my children but everyone,” he said.

His devotion to Hinds is readily apparent in his north Jackson law office, which displays a garden flag from the 2017 Centennial celebration, a small metal cannon made by a Hinds student and auctioned at a golf tournament, and a framed and signed portrait of Dr. Muse.

“He is just a great person. Having the opportunity to have worked with him, all those years, I will never forget,” Piazza said. “One of my prized possessions is a picture of my family with him at his retirement.”

Piazza has remained connected to the college because “I think it’s a great school. But Hinds is not just a school,” he said. “It’s a wonderful place with great people.”

Piazza is a partner in the firm of Keyes Bryson and Piazza and is retired from the Judge Advocate General (JAG) Corps of the U.S. Naval Reserve with the rank of captain.