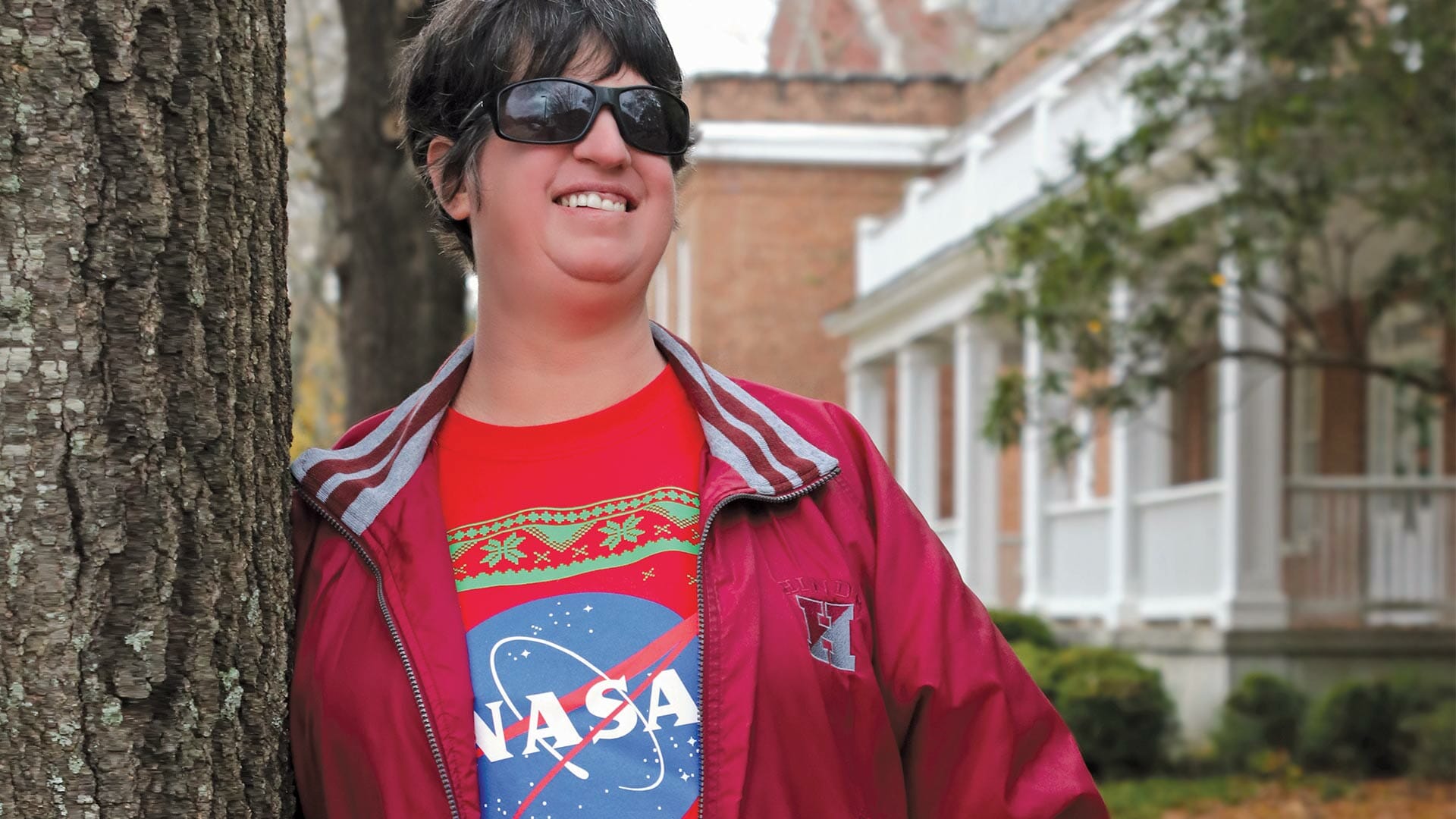 Courtney Smith Ritz had been blind much of her life when she enrolled at Hinds Community College in the 1990s, her sight taken at the age of five by retinoblastoma, a rare form of eye cancer.

“I still had a typical childhood,” Ritz said. “My imagination often turned toward the futuristic, with my room sometimes resembling a spaceship with Star Wars and Transformers toys.”

In school, her condition was no obstacle. The Jackson native graduated valedictorian and participated in everything from band to track at the Mississippi School for the Blind, plus had developed in interest in theater throughout childhood.

But it was at Hinds where her own future took center stage, thanks to the kind of vision supplied to her and other students with disabilities that goes beyond the five senses.

“The pace of college life is faster than what you do in grade school and high school,” she said during a recent visit to the Raymond Campus. “I had outstanding teachers and support here, which of course includes the Disability Support Services area.”

Launched in the 1990s, the Disability Support Services department provides an array of assistance methods via staff and the latest assistive technology to those with documented disabilities. Longtime Disabled Student Specialist Debby Kazery counts Ritz as one of her “standout success stories.”

“Technology in the 1990s for students who were visually impaired was primitive compared to today’s standards, so Courtney had an excellent auditory memory,” said Kazery, who retired in December 2018. “She relied on books in braille, books on cassette tapes ordered by mail, personal transcription of tests and assignments by DSS staff tutors and countless hours of listening to people read aloud.”

Ritz remembers spending several hours a night in her dorm room scanning all her textbooks, page by page, so she could turn the text to braille to read them. “Scanners back then weren’t so good and they made a lot of mistakes, so my reader would have to help me sift through some gibberish.

“It was so helpful to have that department provide readers, tutors and flexibility in taking exams,” she said.

She finished a degree in business administration in information systems from Mississippi State University in 2001, then waited out several months of sending dozens of resumes in hopes of a job. She was surprised by an early-morning phone call that a summer internship opportunity with NASA in Washington, D.C. – one she had only scant hopes to land – had indeed been accepted. “I feared it was too good to be true and they’d mistaken me for someone else,” she said.

That led to a permanent job a year later with the space agency’s Goddard Space Flight Center in Greenbelt, Md. Her job as an IT specialist there involves making sure the agency’s website and web-based applications are compliant with federal law that requires the government’s online presence in all forms is accessible to people who use assistive technology, as she did to get through school.

“Another part of my job is to make sure anything the agency purchases, from telephones to printers, is as accessible as possible,” she said.

Working in science hasn’t sapped her passion for the stage, an interest she kept up at Hinds when she took theater classes from then-director Denise Halbach. Later, in 2003, she met her husband, Scott, while he was a contractor for NASA and both were performing in a Goddard production of the Broadway musical “Barnum.”

“For me, one of the many benefits of attending Hinds was it gave me a chance to broaden my learning,” she said. “It was already a hobby, so when I started working at NASA I found out they had a drama club. You have scientists, engineers and administrative folks performing plays and musicals.”

Ritz hopes her success serves as an example for young adults with disabilities who, like her, are uncertain about a direction after high school.

“In my case, I was a student who went to a very small school before college,” she said. “Coming to Hinds instead of a huge university was a nice transition. Classes were smaller and there was more interaction with the teachers. I’d have been overwhelmed had I gone to a four-year school first. Coming to a school like this, even for someone who has disabilities, is a great opportunity.”