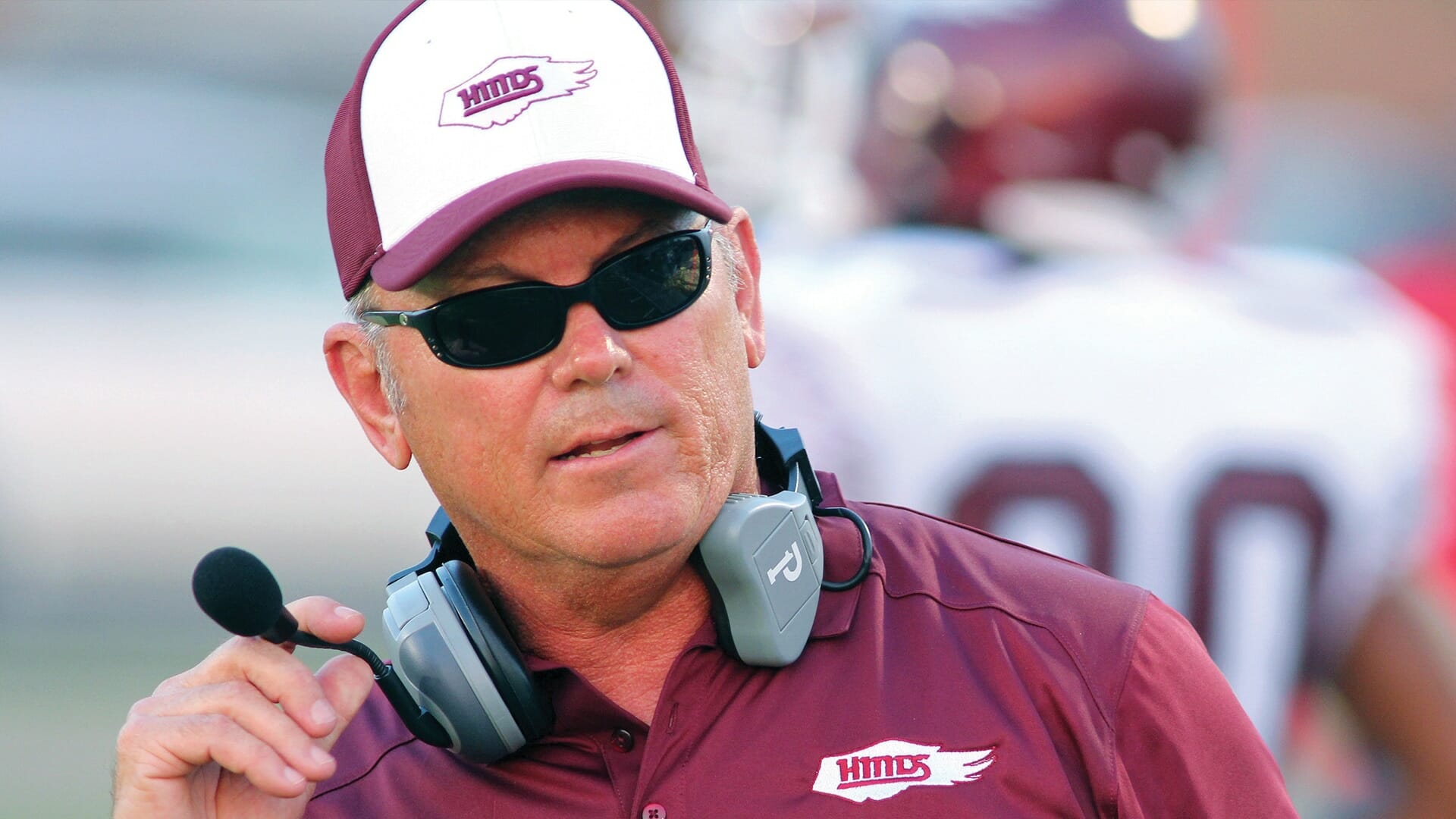 Legendary coach and athletic director Gene Murphy retired at the end of February after a career spanning more than 35 years, numerous football championships and a reputation for touching young athletes’ lives. “Coach Murphy has been an integral part of the Hinds family and had a far-reaching influence on athletes that is immeasurable,” said Hinds President Dr. Stephen Vacik.

Murphy has been athletic director since July 1997 and served two stints as head football coach, the first time from 1987 to 2003 and the second time from 2009 to August 2017. He first came to Hinds in 1983 as an assistant football coach.

In fall 2017, the field at Joe Renfroe Stadium on the Raymond Campus was named Gene Murphy Field in his honor.

“Coach Murphy recruited me in 1985 to play football at Hinds,” said Recruiting Coordinator Reggie Harris. “I noticed very quickly that he was a coach that was driven to be successful. He was tough on us as ballplayers, and he pushed us to be winners. Through the years, I have come across former players who have asked about Coach Murphy because he played a major role in them becoming successful men in life.”

During his tenure and until retiring as head coach, Murphy had been the winningest active coach in the National Junior College Athletic Association. Football teams under his tenure won a number of state and regional titles. Beginning in 1987, the Eagles under Coach Murphy played for nine state championships in 14 years.

In 1988, the Eagles won the Mississippi Association of Community and Junior College title and National Junior College Athletic Association Region 23 title. These successful titles were followed up a few years later by a four-peat between 1994 and 1997 for both trophies, and a sixth state and regional title under Murphy and the program’s 13th overall came in 2000.

During that stretch, numerous former Eagles have gone on to notable careers at four-year universities and more than 50 have played in the National Football League. One of his former players, Brad Banks, was a Heisman Trophy runner-up in 2002. “Coach Murphy was an outstanding football coach as is evidenced by his record,” said Rick Trusty, president of the Hinds Community College Athletics Alumni Chapter. “He accomplished something truly outstanding as he coached teams to win the state championship four years in a row. This brought much recognition to the college, and we will benefit from the foundation that he laid for years to come.

“His Christian influence on the young men that played for him goes beyond the field of play. He helped them become successful men — not just football players,” Trusty said. “I have thoroughly enjoyed my association with him and wish him well. He certainly deserves to enjoy some time for himself.”

Marks of success both on the football field and off are evident in the 15 times the college won the David Halbrook Award since 1987. The award is given to the community or junior college with the highest percentage of graduates or completers in its athletic programs district-wide.
The college intends to conduct a comprehensive search for an athletic director.