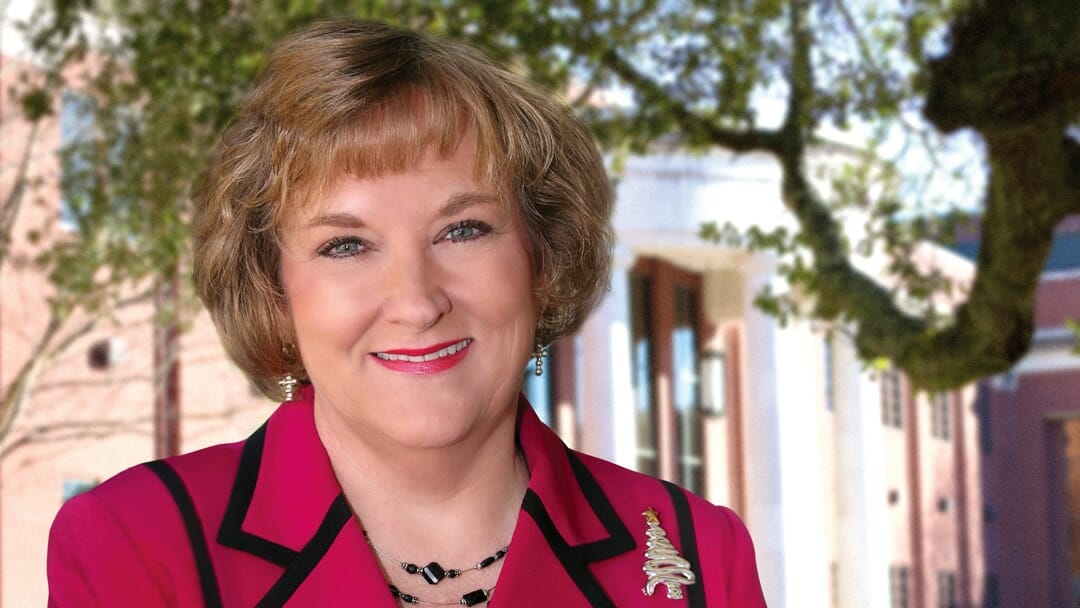 At Jackie Granberry’s last meeting as the executive director of the Hinds Community College Foundation before her upcoming retirement, it was only fitting that she be honored in a truly special way.

The Foundation Board on Nov. 4, led by efforts of the current chairman Percy Thornton and incoming chairman Jimmy Morton (1982), pledged to endow the Jackie Mangum Granberry Scholarship, which was established in 2008 by a gift from Dorothy Miley to show her appreciation and love for Jackie.

As her retirement neared, Morton asked her how the Foundation could honor her. True to her humble spirit, she dodged the question for a long time. The surprise announcement was emotional for her. “The legacy she leaves behind is her desire to help students,” Morton said.

The Foundation board endowed the scholarship to the $15,000 level and is continuing to seek donations to take it beyond the endowment.

“That just blows me away because that is what’s most important to me. I like doing for other people. This has been my life for a long time. And I have loved it. It’s been a fantastic journey,” Granberry said.

For Jackie, it’s always been about the students. From her earliest days as a counselor and recruiter to vice president for Advancement and executive director of the Foundation, Granberry, a Rankin County native, retires in January 2022 after giving 42 years of service to Hinds and being an integral part of the Foundation’s growth, which began in 1978.

“I don’t think there is a person on this campus that loves Hinds Community College more than Jackie Granberry,” Thornton said.

As anyone who has ever met her knows, she is passionate about students and has had an impact on the lives of too many students to count.

Granberry co-founded and, for many years, led Hinds Connection, the college’s student recruiting and public relations group. She has been the inspiration behind more than 40 years of Hinds awards programs and events, including the annual Golf Fun Fest that has raised $1.5 million for student scholarships. With her leadership, the Foundation has grown to include $34.7 million in assets, an Endowment of more than $10.2 million and about $17 million in scholarship funds. The Foundation typically awards $2.5 million annually in student scholarships.

But it’s her down-to-earth, bubbly personality, effervescent smile and the one-on-one relationships she instantly creates with each person she meets for which she is best known.

“She has a great heart for students, and she’s just a fine person. Her wholesome attitude about everything and everybody has been a blessing, really. You can’t help but like Jackie,” said Foundation board member and former Rankin County Chancery Clerk Irl Dean Rhodes.

Rhodes is credited with suggesting then-Hinds President Dr. Clyde Muse hire Granberry as a counselor at the college.

“She had that beautiful personality that she still has today,” said Dr. Muse. “Over the years she proved to be one of the best hires I ever made in more than 60 years in education.”

Dr. Muse’s late wife, Vashti, loved Jackie like a daughter, he said, adding that Jackie was always willing to take on new responsibilities if she could help the college.

Alumnus and Foundation board member Judd Moss (1981), president of the Hinds Connection Alumni chapter, has known Granberry since those early days.

“One of the things I have loved about this lady is I would know a student in need who had no chance. I would walk into her office and walk out and that student would be funded,” Moss said. 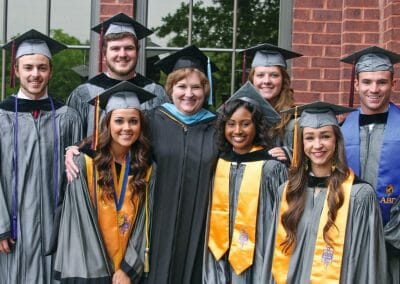 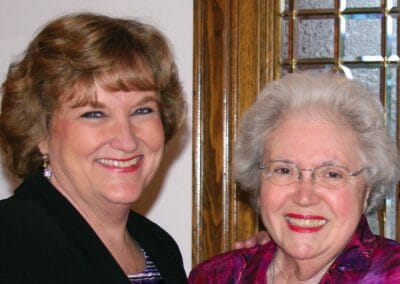 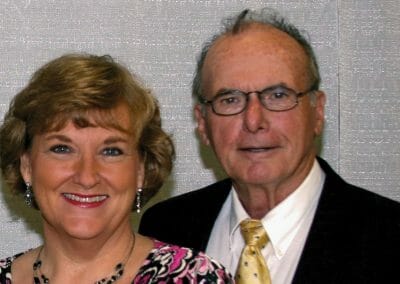 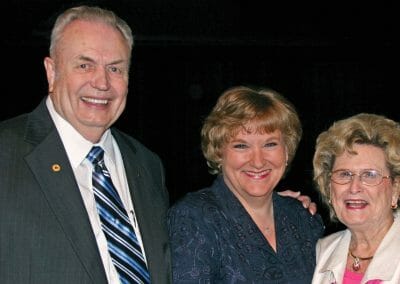 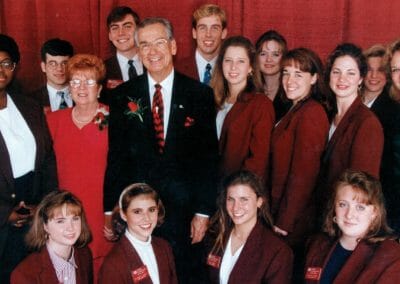 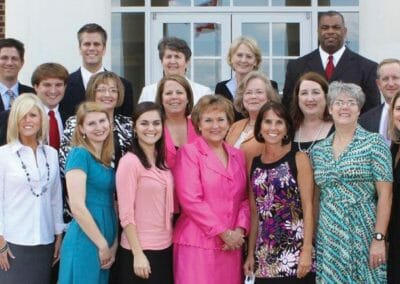 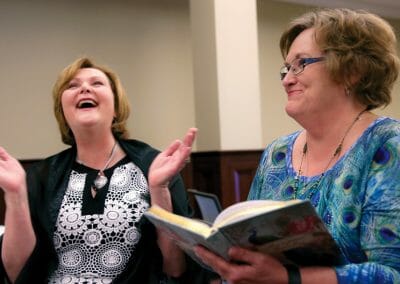 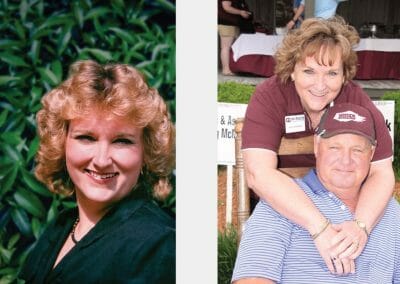 Granberry has mentored many current and former employees in her years at Hinds. She hired Reggie Harris (1987) as a recruiter after he graduated from Hinds and Delta State University. “She has just been an amazing lady to watch, how humble she has been, how hard-working she has been and how helpful she has been, for students as well as employees,” he said.

“Just to give you one example: there was a young man at one of the schools in Jackson that Jackie found out was basically homeless and did not have very much. She made sure that I went by that school, found that young man and offered him every assistance he needed to come to Hinds and be a successful student. And that’s exactly what happened,” Harris said.

Inquisitive and intuitive, Granberry has been a master of building relationships to the benefit of Hinds Community College.

“Her real gift is investing in people and asking her 20 questions,” said Itawamba Community College President Dr. Jay Allen (1991), who worked 16 years under Granberry’s tutelage. “She finds ways to grow you, challenge you and support you.

Work hard and play hard is how Granberry persuaded hundreds of Hinds Connection students to volunteer countless hours preparing, hosting and cleaning up after Hinds events.

“She made work as a student fun; therefore, it was never really work and you wanted to be around Jackie and that office,” Allen said.

“Few people have shaped my life more than Jackie Granberry,” said Dr. Ginger Turner Robbins (1989), district dean of Enrollment Services at Northwest Mississippi Community College. “Jackie has been a mentor, cheerleader, guide and friend from the first day I became a Hinds Connection member to the present. She willingly gave her time, energy, attention and wisdom to so many Connection members over the years, and her legacy is reflected in the success of each student she impacted. Her contributions to the College, the students, and the state of Mississippi are invaluable – may she reap what she has sown many times over!”

Granberry’s long career at Hinds is filled with achievements and honors. She was the college’s first recruiter and first female vice president. She was also the youngest employee to earn the college’s prestigious 3-E Award, which stands for Emphasis on Excellence and Enrichment, and is the college’s highest employee distinction. The LifeStar and Hinds Heroes employee awards are also among her special recognitions. She was co-chair of the Centennial committee and was named among the 100 People Passionate about Hinds.

While Granberry’s legacy began with working directly with students, starting Hinds Connection and taking the Foundation to new levels, she is ending her career not only with the endowed scholarship carrying her name but also starting a new volunteer group for Hinds retirees, like herself. She is recruiting and organizing a posse of Hinds retirees to serve the college in new ways, from helping at special events to tackling time-consuming tasks in college offices. Service and students remain her mission.

give to the Jackie mangum granberry endowed scholarship

“There are givers and takers in our lives. Jackie is one of the givers,” said longtime friend and colleague Colleen Hartfield. “She is just wired that way. Her kindness, compassion and generous nature have made a tremendous impact at Hinds. She works tirelessly to do what is right to the very best of her abilities.”

Everyone is invited to celebrate Jackie Granberry’s career at Hinds at a retirement reception 2 p.m. to 4:30 p.m. Jan. 26 at Eagle Ridge Conference Center on the Raymond Campus. A brief program will be held at 3:30 p.m. For details, contact the Advancement Office at 601.857.3363. 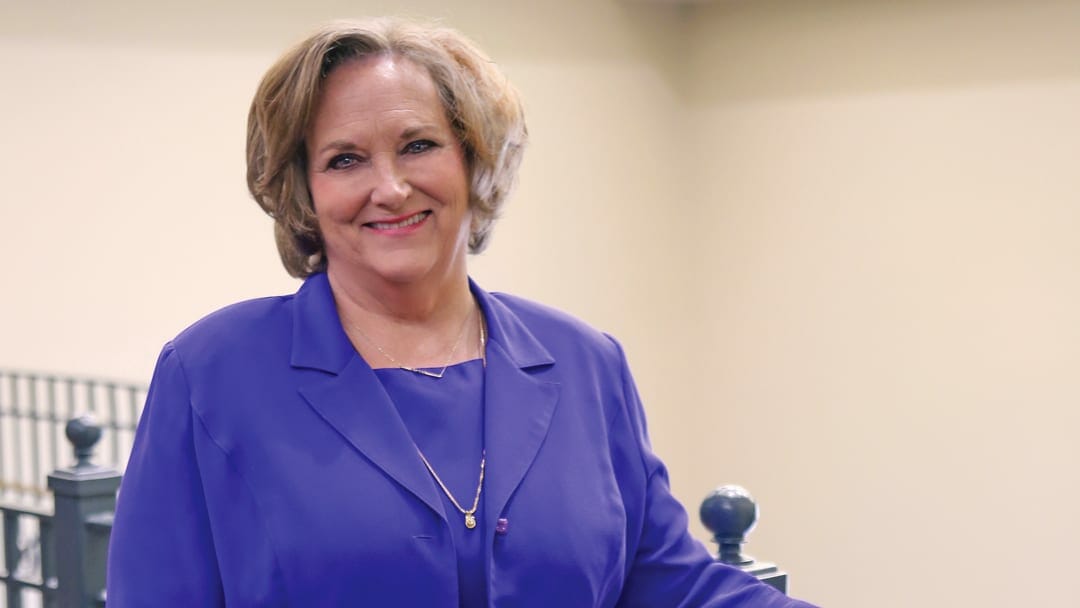